This spring, PLS is producing two plays (abele spelen) translated from the Middle Dutch Van Hulthem Manuscript (dated 1400-1410). Lancelot of Denmark was an extremely popular romance which continued to be performed well into the 18th century. Of Winter and Summer is a humorous debate between allegorical figures about the most appropriate season for … love. 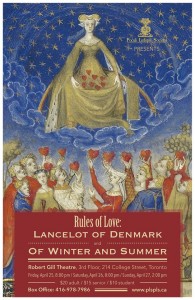 One Response to Rules of Love