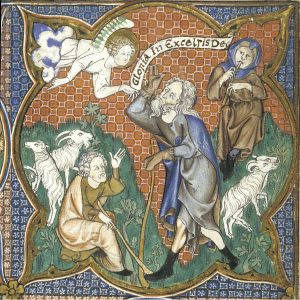 The Second Shepherds’ Play is one of the most popular medieval Biblical comedies, written by the anonymous author known as the Wakefield Master. Part of the collection of plays in the Towneley manuscript, it tells the story of the three shepherds who are the first people to hear the news of the miraculous birth of the Christ child. But the Angel only appears to them after a hilarious slapstick comedic romp involving the sheep-thief Mak and his wife Jill. This production is based on the modernized text by David Parry and directed by PLS Artistic Director Linda Phillips.

Julia Armstrong of St Thomas’s Church interviewed members of the artistic team about the texts, this year’s 19th century sensibility, and the production process. Read the interview here.

Comments Off on Such Splendid Sight Q&A

A few stills from our last rehearsal

We’re fully into the swing of things now. Here’s a few shots I managed to grab at our last rehearsal. 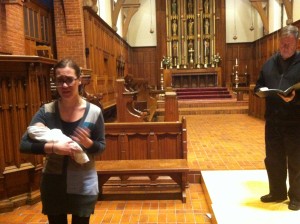 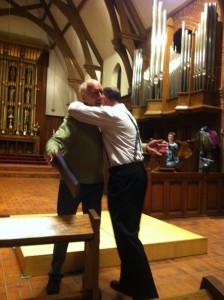 What’s Fr. Rob Mitchell up to?! You’ll have to come see the show to find out 🙂 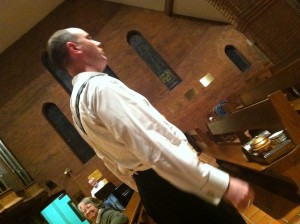 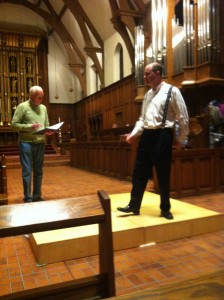 Comments Off on A few stills from our last rehearsal

Filed under A Medieval Christmas, Uncategorized

Christmas begins in July for _A Medieval Christmas_

There’s been some pretty cute memes circulating through my email inbox and my Facebook feeds this week about how Christmas advertising starts way too soon! Today is American Thanksgiving, and so to honour our American cousins, I’ll dedicate my first blog post to them.

For many people the commercial aspect accompanied by the advertising creep  of “Christmas”into as early as September is indeed a bit much. Personally, I find any celebration lacks meaning if we spend too much time planning for it and thinking about it. So in the strictest sense, Christmas starts for me sometime around the middle of December, where it belongs 😀

But for those of us involved in producing A Medieval Christmas–which is now in its fourth year and co-produced by Poculi Ludique Societas (PLS)and St Thomas’s Anglican Church–Christmas starts sometime at the end of June. That’s when PLS’s artistic director (and A Medieval Christmas production and costume designer), Linda Phillips, usually taps me on the shoulder and says we really need to decide about which plays we’re going to do with St. Thomas’s this year. 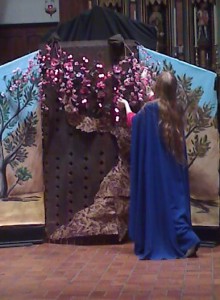 Mary (Alice Deegan) is delighted that the cherry tree blooms in the middle of winter just for her! (from _A Medieval Christmas_ 2012)

About a week after we start talking about which play we should produce, Fr. Rob Mitchell, one of the co-producers for A Medieval Christmas, typically contacts us to ask if we’ve been thinking about this year’s production. Oh yes indeed we have!

Actually, we’ve been thinking about it earlier than that. Our choice of proposed plays starts to get discussed amongst  PLS board members as early as February. Poculi Ludique Societas is a theatre company which specializes in production research in early theatre and performance, which we tend to define as theatre from about the early 12th century until the mid-17th century. We are formally known as The Centre For Performance Study in Early Theatre (CPSET), and we are associated with the Graduate Centre for Study of Drama, Theatre and Performance Studies (Drama Centre) at the University of Toronto. We also have ties to Records of Early English Drama (REED). Our board of directors is made up of some enthusiastic community members (including me), and a number of University researchers and professors from University of Toronto, McMaster University, York University and University of Waterloo. So it’s no surprise that most of our activities centre on research and historiography. But none of us wishes to live in an ivory tower bubble, and that’s why our association with St. Thomas’s Anglican Church is so close to our hearts.

We co-produce A Medieval Christmas with St. Thomas’s for the joy of simply creating a performance. Of course, there’s lots of solid research that informs our performance practice, but this is the one show we get to do just for the fun of it. It’s not connected to a formal conference or symposium, and it isn’t the focus of anyone’s particular research. It’s our opportunity to work with a community group and to bring our board members’ research (past and present) to life in an informal manner outside of academia. Once in passing, our former chair of the board, Dr. Alexandra F. Johnston, said to me that PLS is like the interface between academia and the community. For me, A Medieval Christmas is that interface par excellence.

I’ve come to look forward to this production every year. It just wouldn’t be Christmas for me without it. And I’m lucky, coz for me, Christmas really does start some time in July 😉

Comments Off on Christmas begins in July for _A Medieval Christmas_