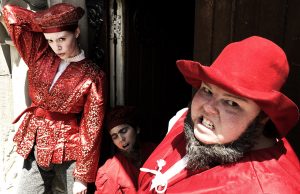 THE PRIDE OF LIFE
(a mor[t]ality play,
whose lost second half is reimagined differently at every show!)

at the Majlis Art Garden (163 Walnut Avenue, Toronto, ON)

ALL SHOWS ARE FREE (donations gratefully accepted!)
AND OPEN TO THE PUBLIC. NO TICKETS NECESSARY!
SPREAD THE WORD!

Ridiculous, irreverent, raucously relevant: join PLS for two uproarious glimpses into the dynamic, scatological, and often hilarious world of English plays as they were performed six centuries ago. We translate original scripts into contemporary English and combine them with real medieval music, costume design, and performance practices — hints of a culture that was, in some ways, more liberated and freethinking than our current one.

In our silly, scatological MANKIND (from the year c. 1464), the stodgy Mercy and the unhinged Mischief strive for the attention of a very distractable Mankind, overwhelming him with grandiose speeches, ridiculous songs, bodily humour, and a cheerful demon who creates human error.

In THE PRIDE OF LIFE, from the late 1300s, the bombastic King Life believes he will live forever… He and his jolly knights ignore the Queen’s urgent warnings that a rival king, has recently landed in their realm. Since only the first half of the original manuscript has been found, we will draw on audience input to improvise the play’s lost but inevitable mortal conclusion differently at every showing!

In a subversion of the original scripts’ anti-feminist themes, both shows are performed by six non-male actors. Family-friendly, free of charge, and accessible, all of our shows will be Relaxed Performances.

Comments Off on Mankind and Pride of Life Toronto Dates